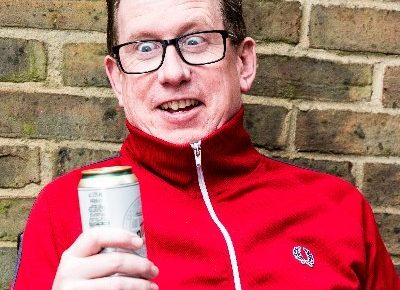 Talking cops and comedy with international comedian Arthur Smith, actor Ian Puleston-Davies, former Met Detective Inspector on the murder squad Paul Byrne, and Britain’s Got Talent finalist Dave Wardell (owner of police dog Finn). In conversation for the first half  and a stand up about Arthur Smith’s policeman father (second half). There will be a warm-up by former MET Detective Inspector turned comedian Paul Byrne.

With so much going on surrounding policing during lockdown and the pandemic, coupled with the nation’s love of crime and policing novels and TV crime dramas such as Heartbeat, Happy Valley and Line of Duty, we are celebrating our everyday heroes. Join Britain’s Got Talent finalist Dave Wardell, former Met Detective Inspector now comedian Paul Byrne, internationally recognised comedian Arthur Smith, and actor and Square Chapel patron Ian Puleston-Davies for an evening of talking cops and comedy.

Dave Wardell is known for his appearance on Britain’s Got Talent where he moved the judges to tears with the powerful and emotive story of an incident whilst he was on duty where he and his police dog Finn were stabbed. The pair also won the hearts and minds of the nation and with such support, went on to implement Finn’s Law – the animal welfare bill that prevents those who attack or injure service animals from claiming self-defence.

Paul Byrne was a Met Detective Inspector on the murder squad who left to pursue his dream of becoming a comedian. With Arthur Smith as his mentor and a 25 year career of police stories, he’s wit is enjoyed by many. He will also be releasing his book about the real line of duty soon.

You might recognise actor/director Ian Puleston-Davies from playing a whole host of characters on stage, on screen and film. Ian has starred The Bill, Tin Star, Coronation Street, Being Human and more. He’s also a patron of Square Chapel.

Comedian Arthur Smith tells the funny and terrifying story of his father Syd, POW and PC on night duty in 1950s London – an ordinary man who lived through extraordinary times.

Syd fought at El Alamein, became a P.O.W., and ended the war in the notorious Colditz Castle in Germany. In the 1950s PC Syd patrolled London’s South Bank and met a gallery of characters, whom he tried his best not to arrest. Arthur tells this 20th Century story with laughter, amazement and a hilarious photo.

You will be sure to enjoy this evening of cops and comedy with this fun trio of authors.

There will be a book signing after the in conversation and comedy gig and the guests will be in the bar after.

“A touching and funny tribute to Arthur Smith’s own father. Beautiful” ★★★★★

Note: Unfortunately, due to personal reasons, Twitter cop Harry Tangye who was on the original billing, is unable to attend this evening. We wish him well.